Master Sergeant Stuart Binger died on January 8, 2007. He left behind his wife Carol, two sisters (Sherry and Stacey), his mother and father. He will be missed by his family, friends, and comrades.

Stuart had a distinguished 35-year military career serving in campaigns from Vietnam through Afghanistan as a Master Sergeant in the U.S. Army Special Forces (Airborne).

Prior to his death, he had been actively involved in training his fellow countrymen for armed conflict in the Middle East, winning accolades for his professionalism and courage. His numerous awards and citations are only surpassed by his camaraderie with his fellow troops.

Stuart was also an avid outdoorsman who eagerly shared his knowledge and love of the outdoors with all of his many friends and family, Stuart will be deeply missed by all. 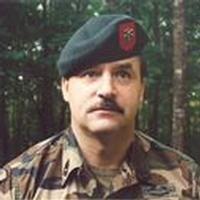