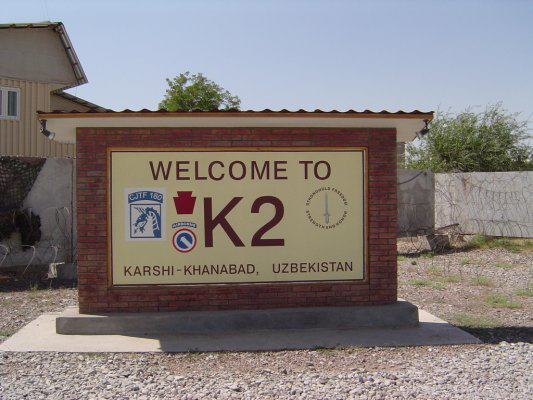 Kashi- Khanabad goes by many names. It was commonly called “K2” by those stationed there. The US Army renamed the base Camp Stronghold Freedom in 2001.

US Service Members deployed to Karshi-Khanabad (K2) after the attacks of 9/11/2001; their goal was to provide supply, logistics, headquarters, and a launching point for troops deployed to bring the terrorists responsible to justice. Service members were predominately from the Air Force and Army, but they also included Marines and the Navy. It was not just active duty service members, but also citizen-soldiers from the National Guard and Reserves who had been called to active duty for Operation Enduring Freedom. The US occupied the base under a contract with the Uzbek government from 2001 to 2005.

Civilian contractors (from the US and other countries) and federal employees were also also present at K2.

While there were as many as 1,300 US Service Members at the base at any one time, there were also hundreds of aircrew members who were transient at the base from 2001-2005 who did crew rest (in 8-12 hour intervals) at the base.

The DoD states that there was over 10,100 US Service Members total deployed to K2 throughout its tenure.

K2, located in the arid Qashqadaryo Province near the border with Tajikistan, in southern Uzbekistan, had an ideal location to act as a logistical base for US Special Forces Operations and US Air Operations carried out in Afghanistan.

K2 was under Soviet control from 1954 until the fall of the Soviet Union in 1992 when control of the base transferred to the newly formed Uzbekistan government. The Soviets also used the tactical location during their campaigns in Afghanistan.

Toxic Exposures to US Service Members

The first US troops began arriving in mid to late September of 2001.

Initial site surveys conducted in late 2001 at the base showed significant short-term effects. In many cases, these documents stated that long-term effects were unknown.  Some mitigation efforts were taken, however many of these efforts were neutralized as the camp was enlarged to accommodate more US Forces.

The US Government must answer the question: Did the Department of Defense weigh the unknown long-term health risks of the base against its strategic feasibility and that the strategic nature of the base won over the health risks?

Posted in About K2